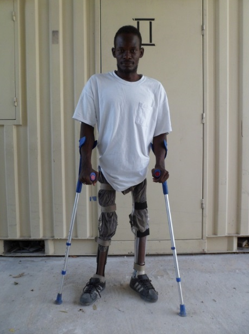 When Frantz, who is now 34 years old, was 10, he contracted polio. The illness affected both limbs, but primarily caused injury to the right leg. He was provided an orthotic device by the orthotic technician from Ecole St. Vincent, a program that was developed many years ago with the assistance of WRF and was then the only such program in Haiti.

A couple of years ago, an outreach team from Cristoffelblindenmission, a German NGO with close cooperative ties to the current WRF/ProsthetiKa program, visited his home in Mariani. They told him that there was a program at Hospital Adventist which was fairly close to Mariani. However, he did not take advantage of the program until this year when he began to experience pain in his left knee and back.   The ProsthetiKa/WRF project fit him with a new knee brace.

Frantz now feels much more comfortable walking. He says, “I walk much every day and feel so much better without the pain in my knee and back.  I am very grateful for the services that I have received here.”