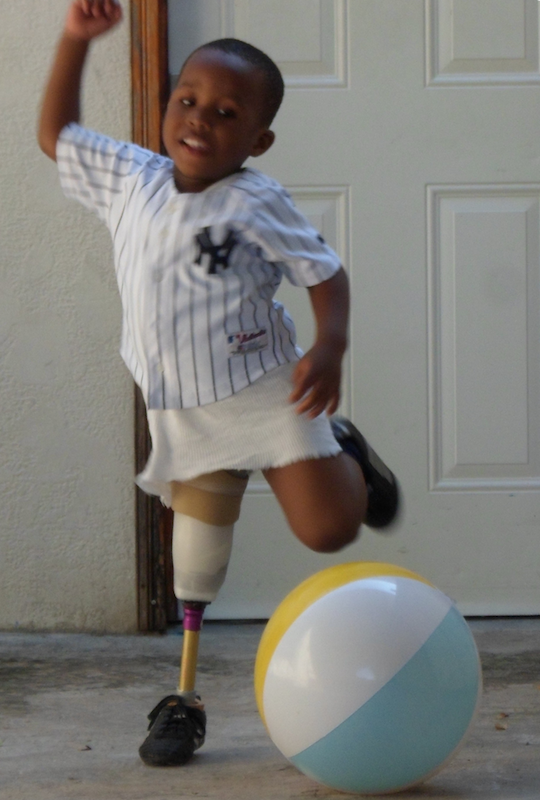 In December of 2012, St. Jean, then a one-year old, was playing at home when he had a bad fall. The following morning, his mother found him to be suffering great pain, so she took him to a local medical clinic. There, a doctor examined him and he was x-rayed. She was told that there was no fracture and was given medication to ease the pain.

Three days later, she found that St. Jean was still experiencing great pain and the mother returned with St. Jean to the clinic. This time x-rays revealed an infection of the tibia. They operated on him to remove the infected tissue, which by this time was of considerable size. Unfortunately, follow-up one week after the procedure revealed further infection and advised his mother that amputation would be necessary. St. Jean underwent amputation surgery and remained hospitalized for two months, during which time some surgical revisions were undertaken.

In July of this year, St. Jean (now 3 years old) and his mother were visited by the Kore Lavi (Supporting Life) Project, a UN initiative to help poor families in Haiti. The program provided St. Jean with crutches, taught him and his mother how he should use them and provided physical therapy exercises. The therapist also taught St. Jean’s mother the exercises so she could continue them.

After a month and a half, he was referred to the WRF/ProsthetiKa program, where he was fitted with his first artificial limb. As a result, both he and his mother are very pleased, especially because they are very poor and the service was provided at no cost to them. The child was able to benefit immediately from his new limb.

His mother said, “My son is very intelligent and learns quickly. We are thankful for this opportunity for him to regain the ability to walk without crutches. This help has been very important and has greatly changed our lives. This year he will begin school and be able to interact and play with friends and other students.”