Working in the poorest country in the Western Hemisphere and in collaboration with international and local partners, WRF responded to the devastating earthquake of 2010, which destroyed major parts of Port-au-Prince and surrounding areas. With a focus on the most vulnerable communities in the Port-au-Prince area, WRF helped establish and continues to support innovative programs that empower persons with disabilities (PWD). 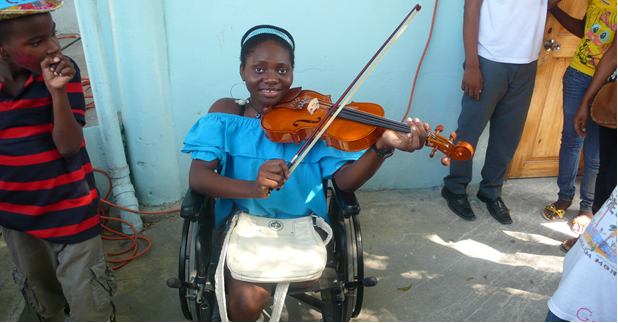 WRF is involved in a project to assist Ecole St. Vincent, a school for children with disabilities founded by the Episcopal Church. The Music for Haiti project was developed by Dr. Josie Stein, a scientist and an amateur violist, who, as a teenager, volunteered to help the children at the Ecole St. Vincent school.

The project collects instruments, music, and other materials to help the children’s music education. The school educates some 450 children with physical disabilities including those with mobility, visual and hearing impairments. 80% of Haitian schools, including, Ecole St. Vincent, were destroyed or badly damaged by the quake.  So far some 30 instruments have been delivered to the school.  Luthiers Sans Frontieres of Belgium also has helped to bring many of the instruments from Europe to Haiti and will be providing assistance in the maintenance of instruments used in the program.

The project also has raised funds to help pay for the music teachers at the school and for the purchase of a keyboard.  For this project, WRF also is partnering with Haiti-New Jersey Partners of the Americas. The music program has long been considered one of the prize programs of the school and has high participation by the school’s students. 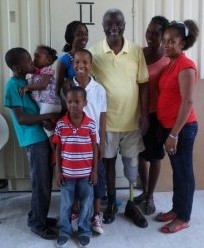 Following the devastating earthquake of 2010, WRF entered into a partnership with ProsthetiKa Inc, of California to develop a Prosthetics and Orthotics Project at Hospital Adventiste D’Haiti, in the Carrefour area of Port-au-Prince. The project produced and fit free of charge artificial limbs and braces for persons with disabilities including those affected by the 2010 earthquake.
The earthquake of January 2010 struck right through the heart of Port-au-Prince, the nation’s capitol and largest city. Over 230,000 Haitians were killed and some 300,000 injured. Over 250,000 Haitians are essentially homeless even now, four years later. Prior to the earthquake, Haiti was by far the poorest country in the Western hemisphere and one of the two or three poorest countries in the world.

As of the end of 2014, the project has provided over 1,200 devices for well over 1,000 Haitians with disabilities. Nearly half of those served were children.

In addition to earthquake victims, the project served persons afflicted with a wide variety of conditions such as hemiplegia, cerebral palsy, accident victims etc. Many infants were served by the project, receiving braces to correct congenital deformities that reflect the lack of adequate maternal and child care available to Haitian families. While many children were being served, the project has provided devices for a wide range of persons, including a few octogenerians-a rarity in Haiti where the average life span is only 63 years (lowest in the Western hemisphere).

The project, which concluded in the winter of 2105, trained Haitian technicians so that services are provided by Haitians themselves. Prosthetic/orthotic experts from WRF and ProsthetiKa carried out annual visits to provide special training and a certified prosthetist/orthotist supervised the program on site.

Contact us to learn how you can support persons with disabilities and other vulnerable communities in Haiti.